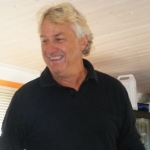 Mike talks to us about jamming all he can into one lifetime! We chat about playing hockey as a kid with pre-NHL players, touring Canada and the USA as the drummer for the Ian Thomas Band, (Wrote the hit “Painted Ladies” among others) being a tennis-pro, and ultimately becoming a member of The Lulu’s Roadhouse Band for 16 years and counting. We find out what went on behind the scenes at LuLu’s (the longest bar in the world) and what it was like to play nightly to thousands of people, as well as how being in a band can be difficult on any relationship. How about living on a houseboat along the shores of Lake Huron and the Florida Coast?! (…until that boat sank!) And finally, talking-nostalgic about those lost days of innocence, a “graceful age”. A life well lived!