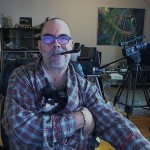 Raised a roaming military brat, we discuss Lindsay’s abusive childhood and how it may have led to a now controlled drug addiction, and on-going mental health issues. Now a videographer working with the 12 Angry Filmmakers group, we delve into his creative mind and life as a musician, writer, poet and acting in TV shows such as, Witchblade, Peter Benchley’s Amazon, and even playing Eddie Kramer in a Showtime movie, “Hendrix”. There are no shortage of interests and adventures in this episode, from his survival of a lightening strike, to being a drug holder for the mafia, to his love of all things space! We get it all on the table in this one.